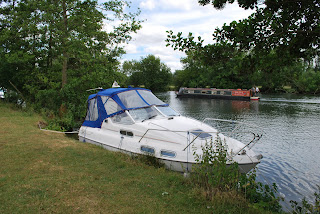 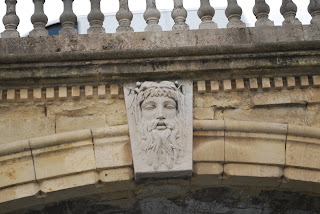 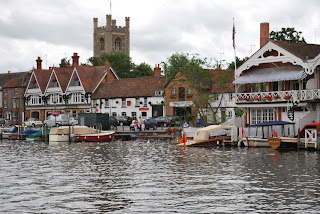 I mentioned going up to Henley for the Festival last year. I'd never been before and I was treated to see Nigel Kennedy with his Orchestra.
We moored Jane Morris by the Rowing Museum and were horrified to see the mooring charges so we managed to squeeze in just upriver of the Town and spent the money we saved on a very nice meal at Loch Fyne.
We've been to a few Loch Fyne restaurants around the South. Our favourite is the one in Winchester. Lovely building, good atmosphere, very good cooking and attentive staff. Henley was almost as good. Reading has a nice outlook overlooking the K&A. Oxford is a bit bland, similar to Bristol. Just my opinion of course.
And the highlight of the Festival weekend (for me at least), was bumping into Paul Daniels and Debbie McGee looking absolutely gorgeous (Debbie, not Paul, obviously).
Posted by Cruising the Middle River Thames at 10:57 No comments:

I'm starting to get a list together of the things needing doing on Jane Morris.
Last year flew by, and the early Summer was good fun. We travelled up to the Henley Festival (silly money for mooring) and saw Nigel Kennedy in fine form.
Jane Morris behaved herself. New holding tank is working fine, engine and outdrive were serviced by young, enthusiastic marine engineer called Charlie Best. He served his marine apprenticeship in Poole and is looking to expand his business (or, at least, was last year). Can't rate him highly enough.
Antifouling was slapped on when the boat was hauled out for engine service. But my preparation was poor, and I've noticed the antifouling is peeling away at the waterline. I should have stripped back all the old antifouling and primed the hull. I didn't and so Jane Morris will have to come out again this Spring and I'll do it properly. When the boat's out I can get Charlie to check the outdrive and sort out why the depth sounder has stopped working.
So, all in all, looking forward to using the boat again. And we hope to venture further afield this year.
Posted by Cruising the Middle River Thames at 10:45 No comments:

River, ice and my local town 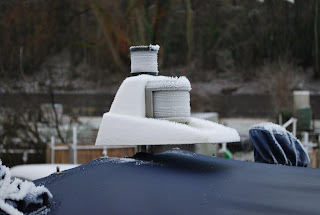 My ideas about using the boat in winter have so far come to nothing. Either it's so cold I can't get anyone to join me, or it's impossible to get to the mooring, or the strong stream warnings put paid to any romantic ideas of a gentle cruise down to Reading.

Maybe I should have had the boat hauled out for the winter. At least I would have been able to check all the things I've been meaning to inspect since I bought the boat last summer.

But I'm hopeful I can borrow a trailer for a week or two. This will allow me to get the boat out, put some fresh antifoul on, and service the outdrive. 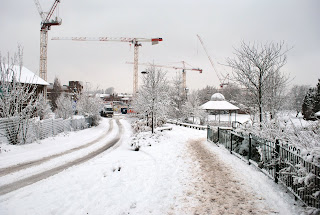 I live in Newbury. It's an expanding town with a shopping centre currently under construction, a newly opened cinema and the Kennet and Avon Canal running through it. All in all, it's a very nice place to live. But there are an extraordinary amount of people who still like to think of it as a quaint market town and want to freeze it in time, no matter what economic or social pressures it faces.

For instance, there's an opportunity to have an arts/community building, financed at little cost to the taxpayer, on the edge of the local park and overlooking the Canal. I think it's a great idea and lots of people agree with me. But lots don't like the idea of a building in the park. I struggle to see their viewpoint. A park is more than just grass and playareas for kids.

But my point is that connected to this plan, is a project to return what is now a car park back to the Canal Wharf, with moorings, a pub and a restaurant. I think it would be a huge boost for Newbury and would strongly differentiate it from, say, Reading or Swindon. Fingers crossed it goes ahead sometime in the future.

*The photo by the way is of Newbury taken yesterday showing Victoria Park, and the new Parkway development under construction. I've been told it's one of very few (if not the only) large scale shopping and housing development currently being built. It's a huge vote of confidence in the town and I'm very pleased to see it happening.
Posted by Cruising the Middle River Thames at 02:34 No comments:

I have a follower. I'm flattered someone out there has bothered to flag little ol' me. So I thought I'd better do an update.

1. I haven't taken Jane Morris out of the water. I felt we hadn't really had much time on the water this summer and if we were to get a nice, cold sunny day then we could play about on the river for a couple of hours.

That's the theory at the moment. The boat has no heating so we'll see how often we actually venture out.

2. The holding tank is ready to be installed. Everything has been delivered and the space for it is now clean. I still need to work out how to fix it down. I'll probably need to glass in a supporting brace or something. I'll sort it out next week.

3. I've been asked my opinion on river travellers and their nuisance value. I think there's two sorts and without wishing to categorise and stereotype there's: 1) the pain that has a large cruiser and takes up lots of space at popular moorings for the weekend and 2) the alternative lifestyle couple with an old narrowboat that's seems welded to some desolate bit of riverbank that no-one wants to moor at. So for me 1) is more of a problem than 2). In fact, I admire 2) and secretly wish I could do the same. More later when I read up about the issue.
Posted by Cruising the Middle River Thames at 15:56 No comments: 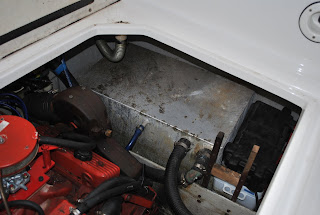 First, I had to get the old tank out. The pump out from two weeks ago ruptured the tank and the contents were everywhere (well, bilge at least).

Out came the battery, battery box and the top half of the wooden steps. Messy.

Unscrew the stainless steel screws holding the tank in place. Getting very messy.

Drain the tank as best I could. I lost the will to live.

Disconnect the inlet, outlet and vent pipes. The vent pipe was completely bunged up with calcium (?).

Unscrew the port side drain pipe (pictured left, just above the old tank), and lift up slightly, so as to allow the tank to slide forward, up and o 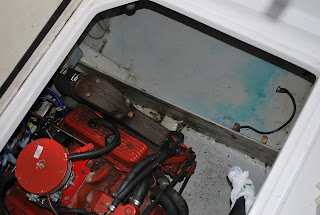 Disconnect the pump out pipe from the deck-fitting.

That's as far as I got on Saturday. Home to hot bath.
Posted by Cruising the Middle River Thames at 15:29 No comments:

Heard this morning about Keith Floyd dying last night. Very sad news. I've got all his cookery books and his style of cooking resonated with me many years ago and I feel I've lost an old friend.

He came to Newbury a couple of years ago and performed at the Corn Exchange in his one-man show. He looked very old and frail, but mentally very alert and he kept the audience enthralled for two hours.

I watched the Channel Four documentary and it felt to me like an obituary - all very apt.
Posted by Cruising the Middle River Thames at 11:31 No comments: